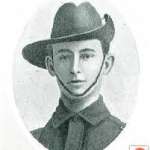 Dudley Maurice ANDERSON was one of a powerful Commitment of 5 Brothers who enlisted for Service in the First World War. His siblings are also honoured on this website:-