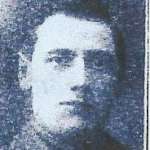 ” This Non- Commissioned Officer is brought to notice for his daring courage and initiative  during the attack on the HINDENBURG LINE  in front of REINCOURT  on the morning of  the 11th April 1917.  When the objective had been obtained he led a bombing party along an exposed flank of the second objective and drove the enemy back  fully a hundred yards.  He held on until no further bombs were available.  He then attempted to deal with the enemy by charging over the top but most of his comrades  were immediately shot down by Machine Gun fire.  He still held on however , gathered up German bombs  lying about the trenches and returned to the attack.  When the end came and all supplies of ammunition were exhausted he made a dash for freedom across bullet swept  ” No Mans Land ” and called on the men with him to do likewise.  He is strongly recommended for high distinction “.