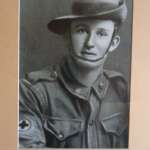 ” For Bravery and Endurance at duty  near POZIERES France 13th to 16th August 1916. Between these dates this N. C. O. worked at the Battalion Aid Post , and whilst under heavy shell fire , he repeatedly carried on his back wounded men from saps into the Aid Post. His cheerful manner and example did much good amongst the wounded. He showed the same qualities again at the Battalion Aid Post  on Sepember 3rd and 4th, 1916 “