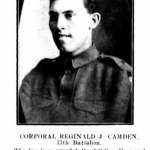 Recommendation ( Action for which commended ) :-  ” For conspicuous gallantry and devotion to duty during the operations 22/25th July 1916 which culminated in the capture of Pozieres, 14 out of  a squad of 20  Stretcher Bearers were either killed or wounded. Throughout the whole operation he worked incessantly and was the means of saving a great number of lives. He moved freely and fearlessly  through the heavy hostile artillery barrage  and his undaunted courage  won the admiration of all ranks “.
Signed by Major General H. R. WALKER, Commanding 1st Australian Division.

Reginald and his brother, Ernest were working together at Hayward’s property in Wokalup, WA, prior to Reginald’s enlistment for service in the First World War.  He received training as a stretcher bearer, prior to departing Fremantle for Egypt and then on to service at Gallipoli.  Ernest enlisted in May 1915, initially joining the 12th Battalion, prior to transferring to the 11th Battalion.
During September 1915, Reginald came across a badly wounded Digger, who had received a severe head wound. He quickly realized the shocking truth, that this wounded man was his brother Ernest.  He helped his brother to an aid post  to allow evacuation to England for specialist medical treatment.

Reginald then survived the horrendous fighting at Pozieres, which left fourteen of his original twenty stretcher bearers either killed or wounded. He and partner Edwin GARDNER rescued a great number of wounded, for which they were both awarded Distinguished Conduct Medals for  bravery.  Reginald was promoted to Sergeant and became a scout for his Battalion.  In April 1917,after surviving through a fifteen hour battle against the enemy at Lagnicourt, France, having lost the use of their Lewis Machine Gun, the men were captured and taken Prisoners of War.

( 1 )- Letter from Red Cross on 15/05/1917 replying to an enquiry from soldier’s Uncle, W.S. EDWARDS of Camden Town, U.K.- ” Six weeks is usually the shortest time that elapses between the date on which a man is missing and the appearance of his name in the German Lists. We should be grateful if you would let us know at once should you receive a letter or card from Sgt. CAMDEN from Germany, as we undertake to supply all Australian Prisoners with regular parcels of food “.

( 2 )- 19/05/1917- Informant HILLS, Pte. H- 1781-  11th Battalion ” D ” Company – ” And a fine fellow too, is CAMDEN. He was in ” D ” Company XV Platoon. They ran short of ammunition and being utterly hopeless, went forward with their hands up, he and all his platoon that were not killed or badly injured. We saw this happen. They had dug in on the wrong side of the wire and were in an isolated position and we could not save them at all. Second Lieutenant STUART was in charge of the Platoon and taken Prisoner “.

( 5 )- Informant- GIBSON, Pte. R. – 2714 – 11th Battalion ” D ” Company:- ” The whole platoon with the exception of five were taken prisoners of war at Bullecourt on the morning of April 16, 1917 about 10.00 a.m. I saw them being marched off by the Germans; they were about 70 yards in front of my platoon. They were in charge of Lieut. STEWART and had advanced too far; they crossed the Sunken Road, and the German wires “.