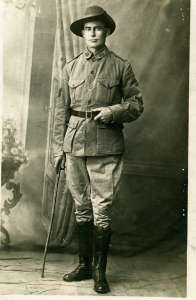 Allan Bennison BLACK was born on 30 January, 1886 at Little River, VIC, being the fourth child of William Murray BLACK and Mary Ann BLACK ( Nee BENNISON ).  The family had settled at Glenmaggie, VIC, where their accumulated wealth had enabled them to acquire several parcels of land. However, due to the dishonesty and subsequent death of the family Lawyer,  the family were forced to sell all of their properties.

The BLACK family then travelled to Western Australia, where they purchased land at Cowcowing via Korrelocking. Allan was fourteen  years old at that time.  He assisted his father as a Farm Labourer & they completed other contract work in the area.  Allan enlisted for War Service on 10 September, 1914, at Blackboy Hill Camp, when 28 years of age.

On completion of four weeks initial training at the Camp, Private BLACK was allotted to ” H ” Company of the 12th Battalion and appointed a Corporal. Training continued until the Battalion boarded the transport ship ” Medic ” at Fremantle, bound for Egypt. In the meantime, Cpl. BLACK had been appointed to the rank of Sergeant.

Sergeant Allan BLACK disembarked at Alexandria, Egypt, on 26 November, 1914.  The men were swiftly transported to the Overseas Training Base to undertake  a rigorous training regime in the surrounding desert landscape.  On 3 March, 1915, Sgt. Allan BLACK and the 12th Battalion  embarked from Alexandria , as part of the Mediterranean Expeditionary Forces, bound for the Gallipoli Peninsular.  As part of the Anzac landing force, they were shipped to Lemnos, which acted as a staging post for the assembly of ships and troops being used in the Gallipoli Campaign.

Whilst on board ship at Lemnos, Sgt. BLACK became ill with German Measles and a severe head cold.  On 16 March, 1915, he was admitted to the basic Hospital, hastily established at Mudros. His hospital tent was struck by a hurricane on the following day. The tent collapsed on Sgt. BLACK , striking him in the head, causing a laceration behind the ear, as well as concussion and lack of consciousness.  The laceration quickly became severely infected.  The Hospital at Mudros had been established to treat light cases only, so was ill-equipped to deal with the severe face swelling with which Sgt. BLACK had become afflicted. Unfortunately, a month passed at Mudros , before evacuation by Hospital Ship could be arranged. It was not until 17 April, 1915 that transfer and admittance to the 15th General Hospital at Alexandria, Egypt, could be completed.  The Egyptian Doctors diagnosed severe illness of Concussion, anterio-grade Amnesia and Erysipelas of the face.

Sgt. BLACK regained consciousness eleven days after admission to Hospital at Alexandria.  He was eventually transferred to the nearby Convalescent Camp on 19 June, 1915.  When discharged from this Camp on 16 October, 1915,  he was sent to attend a Machine Gun Instruction Course at Mustapha Base, near Cairo.  He successfully passed this Course before transferring to the Overseas Training Base Depot at Ghezireh. On 7 January, 1916, he rejoined the 12th Battalion in the field at Tel-el-Kebir, Egypt.

On 1 March, 1916, Sgt. BLACK was transferred to the 52nd Battalion. Two weeks later he was officially notified of his qualification as a First Class Machine Gun Instructor.  Additional intense desert based training ensued , until the 52nd Battalion, as part of the British Expeditionary Forces, embarked Alexandria on 5 June, 1916, bound for Marseilles, France.  Following disembarkation at Marseilles on 11/12 June, 1916, the Battalion were transported by rail to Northern France.  The men undertook Gas Training and were appropriately re-equipped for the pending trench warfare.

The 52nd Battalion arrived in Albert, Somme,  France, in August, 1916, before moving forward near the front line, adjacent to Pozieres. By the end of August, the Battalion had been re-positioned at La Boiselle. Sgt. BLACK and his Company were issued orders to move forward to the jumping off line  for a flank attack on Mouquet Farm at 3.50 a.m. on 3 September, 1916.  Despite heavy casualties around him, Sgt. BLACK provided support with his Lewis Machine Gun to secure the centre  of his Company’s objective.  It was during this operation that Sgt. Allan BLACK was awarded the Distinguished Conduct Medal ” for Conspicuous Gallantry “.

In the Anzac Bulletin, London dated 15 September, 1916 ” Mouquet Farm ” by C.E.W. BEAN, he reported:- ” One of the remaining Segeant’s , a Lewis Gunner, came back from an errand crawling, wounded dangerously through the neck. I don’t want to go away, he said. If I can’t work a Lewis Gun, I can sit by another chap and tell him how”.  In the end , when he was sent away, he was seen crawling on two knees and one hand guiding with the other hand, a fellow gunner who had been hit .  Sgt. BLACK and his fellow gunner negotiated the nightmare passage through No-Mans Land to the safety of a Trench.  Whilst awaiting evacuation, an enemy shell scored a direct hit, causing trench walls to collapse on him. Sgt. BLACK was buried, being knocked unconscious and suffered a permanent back injury.   Battalion mates saved his life by excavating him from the rubble.

Sgt. BLACK was transported by Field Ambulance to a nearby Casualty Clearing Station for initial treatment and evaluation of injuries.  The seriousness of his injuries meant an immediate transfer and admittance to the No. 4 General Hospital at Camieres, France.  Doctors reported he had a seriously infected Neck wound.  On 11 September, 1916, he was evacuated by Hospital Ship from Calais, France, before being admitted to the War Hospital at Keighley, England.  The Medical Report stated that Sgt. BLACK  was wounded in action by a piece of shrapnel entering the left side of his neck, damaging surrounding muscles and the left facial nerve. Doctors also made note of the trench collapse injuring his back and rendering him unconscious.

On 30 September, 1916, a surgical attempt was made to remove the shell fragment, however, it was considered too dangerous to proceed, and the surgery was abandoned. It was noted that the muscles of the jaw and neck were severely damaged.  On 7 October, 1916, Sgt. BLACK was transferred to the 2nd North General Hospital Leeds, England to further enhance rehabilitation from his serious injuries.  He was to spend more than ten months at this Leeds Hospital, until discharged to  care of Administration Headquarters in London on 13 August, 1917.

Sgt. Allan BLACK embarked from Southampton on 10 November, 1917 to rejoin the 52nd Battalion in the field in France. He was now being keenly sought out as a Machine Gun specialist, having been promoted to the rank of Warrant Officer Class 2/Company Sergeant Major on 28 November, 1917.  He was detached to attend the Australian Corps School in France from 12 January, 1918, before rejoining his Unit on 23 February, 1918, at Dernancourt.  On the same day he was wounded in action, sustaining a gunshot wound to his right ankle, but as would be expected, he remained on duty.

On 23 March, 1918 he was detached  for duty to attend  the Officers Training Corps in England, before being sent on command to the No. 6 Officers Cadet Battalion Course.

On 4 November, 1918, WO2/CSM BLACK was promoted to the rank of Second Lieutenant and posted to General Infantry Reinforcements, before reporting to the Overseas Training Brigade at Longbridge Deverill. On 7 February, 1919, he was granted six months leave for Non-Military Employment to attend Leeds University for an Agricultural Chemistry Course. He was subsequently promoted to the rank of Lieutenant on 1 March, 1919.

Lieut. Allan BLACK has his service file noted that he completed the University Course ” Very Satisfactorily “, on 7 August, 1919.  He successfully applied for an additional period of two months leave without pay from 24 August, 1919, for business purposes, to work with Dr. STANSFIELD at Leeds.

On cessation of Leave entitlements, Lieut. BLACK reported to No. 1 Command Depot Sutton Veny, in preparation for return to Australia.  He embarked England on 15 November, 1919, aboard the vessel ” Ypiringa ” arriving at Fremantle on 26 December, 1919.

Lieut. Allan Bennison BLACK DCM was issued with his Certificate of Discharge on 1 November, 1920.

” For conspicuous gallantry in action. He re-organized the left of the line and led them into the enemy’s trench. He showed marked skill with his Machine Guns, and later repaired and brought into action an enemy gun. He set a splendid example of courage and determination throughout “.