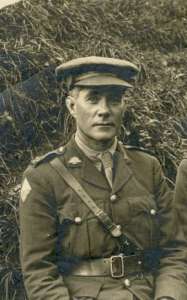 Jack BLAIR was born in Ballarat, Victoria , in October, 1875. His father was a prominent grazier and farmer of the district. Young Jack attended a local State Primary School before enrolling at the School of Mines in Ballarat. On graduation, he enrolled in the Teachers College in Melbourne and succeeded in qualifying to be a teacher.

BLAIR’s teaching career started in Victoria, before he took the opportunity to transfer to Western Australia in 1896. He initially taught at the Perth Boys School before transfers followed to Coolup, Collie, Donnybrook , Maylands, Rosalie, Norseman and York. He became the Acting Headmaster or inaugural Head Teacher at the York Primary School and had proven to be very successful in setting up new schools.  He was appointed as Collie’s first School Teacher in 1899, starting with 36 children.  Student numbers had quickly grown to 170, before he was transferred to Donnybrook for the 1901 School Year.

In 1908, Jack BLAIR passed further qualifying examinations which led to his appointment at Wagin Primary School in 1909. He married his second wife,  Mary , in 1910 whilst working at Wagin ( tragically his first wife, Janet, who he had married in Collie in 1900, had died from ill health in Perth in 1905. He and Janet had previously lost 2 infant sons , who had died in 1901 and 1903 respectively ).  BLAIR was further promoted in January, 1913, when appointed Headmaster at Bunbury Central State School.

Following the outbreak of the First World War, Jack BLAIR volunteered for active service and completed his initial medical examination in Bunbury, WA on 16 August, 1915. The Southern Times Bunbury of  Tuesday 21 September, 1915, wrote – “ On Monday afternoon, the children of the State School gave an enthusiastic send-off  to their Headmaster, Mr. J.T. BLAIR, who has gone into camp. Mr. BLAIR was exceedingly popular  amongst his young charges, and has left an undoubted mark on the School.  The scholars marched to the Station and gave three/tinging cheers for their departing Head as the train steamed out “.

His official service enlistment date became 16 September, 1915, when he was just shy of 40 years of age. Private Jack BLAIR was allocated to the 7th Reinforcements of the 28th Battalion and appointed to the rank of Provisional Sergeant on 1 November, 1915, whilst continuing training at Blackboy Hill Camp, WA.

Sergeant Jack BLAIR embarked from Fremantle, WA on 18 January, 1916 aboard the transport ship “ Medic “, which docked at Alexandria Egypt on 16 February, 1916. His Unit was later trans-shipped to Marseilles , France where he disembarked on 27 March, 1916.  He completed further training at the British Forces Training Base where he chose to revert to ranks, before joining the 28th Battalion in action in the field at Armentieres, France on 3 May, 1916.

We are not allowed  to put any information in our letters that would be of use to our enemies and of course we do not wish to give them any – they know enough already.
Aeroplanes are as common to us now as motor cars are in Bunbury. The sudden removal from Egypt has upset the mail arrangements, but I hope to soon hear from you. Several Bunbury boys are in our Company. Sergeant Percy BLYTHE is a very popular boy and Walter MOORE, among others. Now, dear boys and girls, I hope you are all having a happy and prosperous time and that as soon as this war is over, we will meet again. With kindest regards and best wishes to all “.

At the time that Sgt. Jack BLAIR arrived near the front lines, trench warfare had become deadlocked around Vimy, Amiens and Albert and had included huge losses of Australian troops, near Fromelles.
On 3rd June 1916, BLAIR was slightly wounded in a hand and required hospitilization for a few days of treatment. Soon after rejoining his Unit, they were engaged in the Battles of Pozieres where BLAIR was seriously wounded by gunshots to the groin and thigh. He was initially admitted to a Stationary Hospital in Rouen, France. However, the seriousness of the wounds forced his evacuation for further treatment at the 3rd London General Hospital at Wandsworth, England, being admitted on 4 August, 1916.

During his treatment and recuperation at Wandsworth, Sgt. BLAIR wrote a number of letters to his wife and friends; a number had extracts published in the local newspaper, and included:-
Firstly, the account of his wounding in the Battle of Pozieres on 29 July, 1916, reads- “At 11.00pm we reached our assembling point in No Man’s Land between our own and the German trenches…….we moved forward silently and lay down. The Germans evisently spotted us , for their deadly machine guns and artillery poured on us. Many were hit, but we lay still, until we got the word to advance. Then the earth seemed to pour lead and other metals from all points at once. The bullets were thick as hailstones and the shells and shrapnel terrific. One only wonders that any could live a minute in that field of fire. Our men were dropping like flies from poison, but still we pushed on. The smoke from the bursting shells prevented my seeing very far. I hung to my section and went on, and when within 30 yards of the Germans’ barbed wire, I was struck in the groin and body with something both heavy and hot. I was stunned but retained consciousness. I thought my clothes were on fire and tried to put them out…..I was bleeding freely.”

It was quite ironic that BLAIR, in an earlier letter to friends he had stated:- “ We now knew for certain that our fellows had failed to take the trenches and we were in a queer fix. My mate reckoned we were done for, but I was not willing to give up the ghost and preferred the bullets of machine guns, to be taken prisoner of war, bayoneted by the Huns .”

In another letter to the students of the Bunbury Central School, he informed :-  “ Of course we sleep in our clothes, so as to be ready at all times to seize our loaded rifles and get to business. There is no mistake about it, this is quite a change from School Teaching .“  A number of BLAIR’s letters also referred to other Bunbury men he had met from the 11th, 16th and 28th Battalions, when they were deployed together.

Sgt. Jack BLAIR’s convalescence and rehabilitation lasted until the end of September, 1916, when he was posted to the 7th Training Battalion at Perham Downs in England.  In early November, 1916, he was transferred to Officer Training Programs, firstly at Oxford, then joining the Officer Cadet Battalion at Pembroke College in Cambridge. In late March, 1917, BLAIR was promoted to the rank of Second Lieutenant and granted leave in the United Kingdom.  He subsequently rejoined the 28th Battalion in the field in France on 21 May, 1917 ( shortly after the Battle of Bullecourt, from 3-17 May, 1917 ).  In late June, 1917, he suffered through ten days of illness, before being detached to the Corps School in France from 22 July, 1917. He eventually was instructed to rejoin the 28th Battalion in the field in France on 26 August, 1917.

2nd Lieut. Jack BLAIR was admitted to St. Omer Hospital in France on 8 September, 1917, where he was to spend three weeks overcoming Cellulitis in a foot. During hospitilization, he was promoted to the rank of Lieutenant, and on discharge he was sent to rejoin the 28th Battalion at the front in Belgium. A short extract from one of his letters read :- “ We had some of our biggest guns in action and the damage they did was terrible.  I often watched the bombardments at night and they were magnificent.  The heavens were simply ablaze with flashes and the noise was worse than any thunderstorm ever heard. “

The guns fell silent on 11 November, 1918, the Armistice was signed, the War ended  and Lieut. Jack BLAIR was transferred to serve in London, attached to the War Records Office.  He embarked from England, aboard the transport ship “ Orontes “ on 15 May, 1919, bound for Australia, where he was discharged from Army Service on 7 September, 1919.

After his  War Service Discharge, Jack BLAIR returned to teaching ranks at Fremantle Boys School, and within three months, was elected President of the Teachers Union. He became embroiled in negotiations on the level of salaries being paid to Teachers and Civil Servants. He gained strong support from Inspectors and Headmasters to proceed to strike. The strike promoted a solution by using peaceful means, which led to a successful outcome for all Teachers. BLAIR became the key figure in negotiations on the terms of settlement and he remained President of the Teachers Union for a further three years.

At a 1921 Union Conference, Jack BLAIR gave a lengthy address that demonstrated his incredible foresight, particularly in the developing of the following achievements that were not in place prior to the BLAIR speech:-

During his role with the Teachers Union, BLAIR also collaborated with Colonel Herbert B. COLLETT to compile the book “ The 28th, A record of War Service  with the Australian Imperial Force, 1915-1919. COLLETT states in the book Preface – “ I am indebted to Lieut J.T. BLAIR , who placed at my disposal  a considerable quantity of material which he had been at great pains  to collect whilst in London”.

In 1922, when Jack BLAIR did not re-nominate for the role of Teachers Union President, the Director of Education appointed him as Inspector of Schools. He served in this role for fifteen years, being based in Narrogin for six years, Kalgoorlie for three years and the final six years in Bunbury.  He retired from the Education Department in 1937 and together with his wife, Mary, began dedicated volunteer activities and Community Service.

Jack BLAIR was elected Mayor of Bunbury in late 1938, serving for five years until 1943.  He died at the age of 77 years, on 15 January, 1952. The South Western Times newspaper of the day, published the following:-  “ Death of Mr. J. T. BLAIR
A long life of fine work crowned with high regard
John Thomas BLAIR, who had devoted his whole life
as a worker for people of all classes in various
districts of Western Australia, died in Hollywood
Hospital on Tuesday 15 January, 1952.
The Mayor of Bunbury ( Mr. F. J. WITHERS ) said – “ After his five years as Mayor of Bunbury, no-one could deny that Mr. BLAIR was one of nature’s gentlemen. Mr. BLAIR was elected unopposed as Mayor of Bunbury in 1938, and continued in office until the 1943 elections. His policy had always been to work in complete harmony with everyone, and to ensure as much as possible for Bunbury and the district in the shortest time possible. Much has been done in Bunbury by past Councils to improve and beautify the Town, but during his term as Mayor, his Council and officers carried on the good work and noticeable improvements were everywhere visible. At that time it was a known fact that no Town of the size of Bunbury in Western Australia could show the good roads, excellent footpaths and the general beautification of the surroundings which were to be seen in Bunbury. Scores of visitors to the Town had congratulated BLAIR as Mayor, on the cleanliness and beauty of the City “.