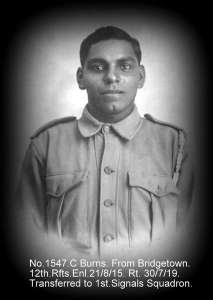 “ One of up to 20 indigenous soldiers to have completed active overseas service in both the First and Second World Wars. The first Aboriginal student to attend Guildford Grammar School and renowned for his breathtaking skills as a Rover when playing Australian Rules Football. He was a softly spoken man who had a heart of gold, according to residents of the Karri Country , near Pemberton, who felt it was their privilege to have known Charlie BURNS “.

Charlie BURNS is believed to have been born on a Cattle Station, near Wyndham, Western Australia, on 21 September, 1896. ( His parents names remain unknown ).  At 6 years of age , he was adopted by Guardians, Frederick and Grace BROCKMAN, who had been residing in Guildford, Western Australia.  Frederick was a Licensed Surveyor who had previously worked in the Wyndham District ( he became Western Australia’s Surveyor General in 1915 ). The BROCKMAN family also owned a farm on the Warren River, South of Pemberton, together with having Cattle Leases on the South Coast.

Charlie BURNS enhanced his bush skills and strong work ethic , during these early, impressionable years with the BROCKMAN’S in the Karri Country. He transferred to Guildford in 1908/09 to further his education, becoming the first ever Aboriginal student to attend Guildford Grammar School.  After completing his studies, he returned to work alongside Frederick BROCKMAN, as a Survey Hand.  He is known to have surveyed many of the original roads around Pemberton and Northcliffe, as well as the Town of Manjimup. Immediately prior to the outbreak of the First World War, Charlie was working locally as a Blacksmith’s Striker.

Charlie BURNS enlisted for War Service at Claremont, WA , on 21 August, 1915, shortly before his nineteenth birthday. He was initially allocated to the 25th Depot Company as a Private, then subsequently transferred to the 12th Reinforcements of the 10th Light Horse Regiment at Blackboy Hill Camp, WA.  Pte. Charlie BURNS embarked Fremantle, WA, aboard the transport ship “ Mongolia “, on 22 November, 1915, disembarking at Alexandria, Egypt on 14 December, 1915.  He underwent initial training at the Overseas Base Camp, before being transferred to the Australian Army Service Corps. On 3 January, 1916, he was promoted to the rank of Driver at Salhia, Heliopolis, Egypt. He then entrained to Helmaih siding on 26 February, 1916.

Driver BURNS was transferred to the 1st Signal Squadron of the Anzac Mounted Division, based at Romani, Egypt, on 28 March, 1916. He served almost continuously in Egypt for the next eighteen months. His only service interruption was caused by the impact of an ear infection, requiring hospitalisation for seven days at Kantara, Egypt, from 13 July, 1916.

Whilst serving in Palestine on 11 September, 1917, Driver BURNS heard calls of distress from a New Zealand soldier, Trooper George MOFFAT of the Wellington Mounted Rifles, who was swimming nearby. ( A number of soldiers had drowned in the treacherous rip that prevailed in this area of water ). Trooper MOFFAT was being washed out to sea. BURNS was a strong and confident swimmer, so immediately set off to swim a life line out to the New Zealander. Unfortunately, the line snapped on the way, so BURNS was forced to risk his life to rescue MOFFAT through strong currents, under great difficulty. They were both completely spent when finally  reaching dry land .
The Corps Commander of the Desert Mounted Corps, directed that the gallant conduct of Driver BURNS be recorded in the Routine Orders of the Corps.

Driver Charlie BURNS continued his honourable service in Egypt, Sinai and Palestine until mid 1919, taking occasional breaks at the Rest Camp in Port Said, Egypt. He embarked from Kantara,  Egypt aboard the transport ship “ Malta “, on 3 July, 1919, bound for Australia. During this return trip, he suffered from Colic, being admitted to the Ship’s Hospital on 16 July, 1919.  Charlie BURNS disembarked in Melbourne on 30 July, 1919. On return to Western Australia, he was discharged from War Service on 21 September, 1919 ( Termination of his Period of Enlistment ).

Charlie BURNS returned to Karri Country, where he worked as a Stockman on the BROCKMAN properties for a number of years.  He helped build many kilometres of fencing in the Pemberton area, as well as assisting restore large areas of sand dunes on the Warren Coast, by planting Marram grass. He was an outstanding Australian Rules Footballer for the Pemberton Warriors Team during the 1920’s/1930’s, being keenly sought by the Subiaco Football Club in 1921.  BURNS declined the offer to play in Perth, preferring to live and work in the deeper South West. In the mid to late 1930’s, he worked as a Blacksmith for the Northcliffe Group Settlement.

In 1940, Charlie BURNS was working as a Slaughterman in Pemberton, when he committed to enlist for service in the Second World War. He was approaching forty-five ( 45 ) years of age, when he enlisted on 28 April, 1940.  Initial training was conducted at Belmont, WA, after allocation to the 3rd Railways Construction Company as a TG3 Platelayer.

Charlie BURNS embarked from Fremantle, WA bound for Kantara, Egypt, disembarking on 13 October, 1940.  He served with the 3rd ARCC as a Platelayer until late September, 1941, then relinquished his trade, to be appointed as a Group 2 Cook within the same Company. Almost twelve ( 12 ) months later,  during August, 1942, Charlie BURNS spent three ( 3 ) weeks in Hospital, stricken with Phlebotomos Fever.

It appears that the Army were cracking down on over-aged servicemen, so BURNS was marched out to undergo a Medical Board Assessment.  Unsurprisingly, he was assessed as being fit for ongoing active service and transferred to Depot Battalion Headquarters Section, Egypt. Approximately six ( 6 ) weeks later he embarked Kantara, Egypt bound for Fremantle, WA, disembarking on 18 February, 1943. Charlie was based at Claremont, WA for more than twelve ( 12 ) months, where he worked for Battalion and Vocational Headquarters Staff. On 31 March, 1944, he was transferred to the Catering Corps and entrained to Royal Park Barracks, Carlton, Victoria. After eight ( 8 ) months service in Victoria, Charlie was transferred to Western Australia for Discharge, due to age.

Charlie BURNS spent five ( 5 ) weeks in Hospital before being discharged from War Service at Karrakatta, WA, on 17 January, 1945.  He had completed eight hundred and seventy-nine ( 879 ) days of service outside of Australia.

Charlie BURNS proved to be one of the best loved and most interesting characters of the tall timber country.  He was revered for his ability to live for months in the bush, with his horse, a cattle dog, a rifle and a bag of flour. He was sought after for his vast knowledge of the local environment, was well known  for his hunting and cooking skills, and taught many local people about the bush.  He passed away on 18 September, 1990, at ninety-four  ( 94 ) years of age and is buried within the grounds of the Manjimup Old Cemetery, WA, in Grave No. 1363.