“ Awarded the Victoria Cross  for his most conspicuous gallantry and devotion to duty during the Battle of Messines, Belgium on 7 June, 1917 “. 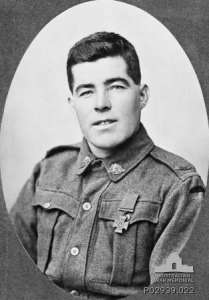 The family re-located to Donnybrook, WA for  a short time, when he was two years old, until re-locating to Yarloop, WA. The family resided in the Yarloop District for many years, where John was a well-known member of the local Australian Rules football team. It was noted that he was already showing signs of the bulldog pluck and tenacity that abounded during his Military Service.

The CARROLL family transferred to Kurrawang, Goldfields WA prior to the outbreak of the First World War , where John and his father worked as labourers for the Goldfields Firewood Supply Company.  John was tall, well-built and athletic, which aided his rise in prominence as a vital component of the local Goldfields Australian Rules football team. He was successful in obtaining employment as a Railway Guard on the Kurrawang railway line.  His life was to change forever, following his enlistment for War Service at the Blackboy Hill Camp on 27 April, 1916, at the age of 24 years.

Private CARROLL was allocated for training with the second reinforcements of the 44th Battalion at Claremont, WA.  He embarked from Fremantle WA on 7 August, 1916 aboard the vessel “ Miltiades “, bound for Plymouth, England.  He disembarked in England on 25 September, 1916, being posted to the 11th Training Battalion at Codford.  During this training regime, CARROLL was transferred to the 33rd Battalion on 14 November, 1916.  He sailed to Marseilles, France a week later, immediately proceeding int the line at Armentieres France, where he remained with his Battalion through April, 1917.

In early May, 1917, Pte. CARROLL and his Battalion were moved across the border into Belgium, to take up position for the planned Messines offensive. The Germans had held this strategic and well-fortified position at Messines Ridge, since 1914.  John CARROLL etched his name in Australian Folklore, when awarded the Victoria Cross for his sustained acts of “ most wonderful courage and fearlessness “ during fighting from 7-12 June 1917, at the Battle of Messines.

Whilst taking part in a working party in the forward areas on 9 July, 1917, Pte. CARROLL was wounded in the chest. He was evacuated to the 14th General Hospital at Boulogne France for treatment, before spending a month in the Rest Camp nearby. It was during this period of inactivity that John CARROLL was formally awarded the Victoria Cross by his Majesty the King on 2 August, 1917.

On 19 September 1917, CARROLL was promoted to the rank of Lance Corporal.  Shortly thereafter, L/Cpl CARROLL was fighting in the First Battle of Passchendaele, being severely wounded in action on 12 October, 1917.  He was admitted to the 55th General Hospital at Boulogne , France, however was evacuated and admitted to the 2nd Birmingham War Hospital, Northfield on 21 October, 1917 for further specialist treatment.  The severity of this wound effectively ended his active service.

Lance Corporal John CARROLL was invested with his Victoria Cross by King George V at Buckingham Palace on 23 March, 1918.  The Recommendation for his award read:- “ For most conspicuous gallantry and devotion to duty.  In the Battle of Messines Ridge on June 7th Private John CARROLL acted as a mopper-up. Immediately the barrage lifted he rushed the enemy’s trench and bayoneted four Germans.  He then noticed a comrade in difficulties with one of the enemy and he at once proceeded to his comrade’s assistance and killed the German. He continued working ahead with grim determination and wonderful fearlessness, and came across a machine-gun and team of four men in a shell hole; they offered resistance but single-handed he attacked the entire team, killed them all and captured the gun. Later, two of his comrades were buried by a shell, and in spite of very heavy shelling and machine-gun fire, he extricated them.  During the 96 hours the Battalion was in the line, Pte. CARROLL displayed most wonderful courage and fearlessness.  Each night he went out wiring in front of the new line and did excellent work.  On two occasions he brought wounded men back to our line.  His magnificent example inspired the whole Battalion “.

John CARROLL VC briefly rejoined his Battalion in the field in France, in late June 1918, however was transferred back to London within 5 weeks.  On 24 August 1918, he joined with 9 other Australian Victoria Cross winners and set sail for Australia. This direction by Prime Minister Billy HUGHES was to allow the men to spearhead new recruitment drives, after the Conscription Referenda had failed.  These 9 men received rousing receptions in Perth, WA, after disembarkation at Fremantle, WA on 15 October, 1918.

John CARROLL VC, was discharged from Military Service in Perth, WA on 1 January, 1919, noted that this was termination of his period of enlistment.  He promptly returned to Kurrawang, WA,  where he resumed his career as a Railway Guard on the Kurrawang Line.

In the mid 1920’s, John moved back to the Yarloop district, where he worked as a Railway Truck Examiner.  On Anzac Day 1927, CARROLL was one of 23 Victoria Cross recipients to attend  an Anzac Commemoration Service in Melbourne, in the presence of the HRH Duke of York ( future King George VI ).

Sadly, in early November 1927, whilst working at the Hoffman’s Timber Mill, he slipped when boarding a train during shunting operations, severely crushing his right foot.  The injury proved to be catastrophic, his foot being subjected to amputation.  Despite this setback, CARROLL continued to work as a labourer and railway employee, while living in Yarloop.

John CARROLL was a member of the Australian Contingent during the Victoria Cross Centenary celebrations in London in 1956.

He was fondly remembered by his A.I.F comrades as “ the wild Irishman “, however, he presented with a casual, humble and happy-go-lucky nature. He was also commonly referred to, by nickname, as “ Referendum CARROLL “, as he rarely said anything, other than YES or NO.

John CARROLL retired from the workforce to enjoy his final years in the Perth suburb of Bedford.  He died on 4 October, 1971, at 80 years of age and was buried in the Karrakatta Cemetery, Perth, in grave No. KA 658, with Full Military Honours.

His Victoria Cross was donated to the Australian War Memorial, Canberra, in 1989.