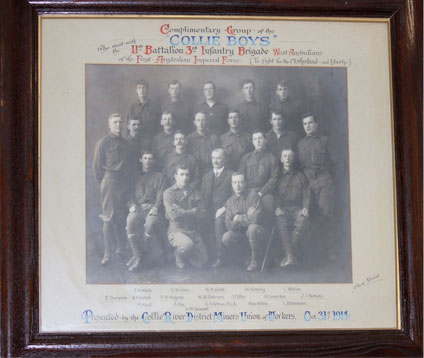 The 18 ‘Collie boys’ shown in the above group photo enlisted in 1914 and embarked with the original 11th Battalion, AIF. Sadly six of those Boys (1 in 3), never returned to their home in the Jarrah forests surrounding Collie. They were;

Awards/Decorations – Three of the Collie Boys shown in the group photo received bravery awards, they were;

WILSON  served in France with the 11th Field Coy Engineers. (A. Wilson next to him in photo, is his son, 848, Private Alan Wilson).

The Author acknowledges the assistance of Grahame Old from the COLLIE  CARDIFF RSL Sub Branch, for the additional Information on the ‘Collie Boys’ of WW1.