“Awarded Military Medals on two separate occasions, for conspicuous bravery and devotion to duty. Firstly, during the attack on Bullecourt and then for his actions  at Bellewarde Ridge, East of Ypres, Belgium “. 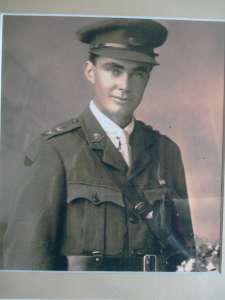 James Ramsay FORREST ( known as “Jim” ), was born on 13 April, 1895 at the FORREST family property, “Seaview Farm “, near Ludlow, Western Australia. He was the twelfth child born to James Hill FORREST and Anna Maria ( nee RAMSAY ).  Jim  was educated at Ludlow, Wonnerup and Bunbury Primary Schools. He transferred to Perth High School to complete his Secondary Education, however, only stayed eighteen months before returning to work on the family farm at Ludlow.

Shortly after leaving High School, Jim learnt that the Great War 1914-1918 had been declared. He was very keen to enlist in the AIF, despite his occupation as a farm worker, granting exemption from enlistment. His parents were strongly opposed to Jim’s plans to enlist, arranging him to transfer for work at his Uncle David’s Minderoo Station, near Onslow, WA.  Uncle David had recently lost a son, who had died aboard a Troop Ship whilst in transit to War Service. The family expected that this tragic loss of life, would cause David to dissuade Jim from any further thought of enlistment.

Jim FORREST worked at Minderoo Station for six months, until his determination to enlist for service, overwhelmed him. He officially enlisted for war service at Onslow, WA on 23 November, 1915. He joined the 10th Light Horse Regiment at Blackboy Hill, WA , on 4 January, 1916, as a Private.

Private FORREST had an immediate impact on those around him, standing out as a leader of men.  He was promptly appointed to the rank of Sergeant on 14 February, 1916; two days later he embarked from Fremantle, WA,  aboard the troop ship “ Warilda “, bound for Suez, Egypt.  He disembarked at Suez on 9 March, 1916, then underwent training with the 3rd Light Horse Training Regiment based at Heliopolis, Egypt.

In early May, 1917, Sgt. James Ramsay FORREST was awarded the first of his Military Medals. The citation read as follows:-  “ Conspicuous bravery and devotion to duty on the morning of the 3 May, 1917, during the attack on Bullecourt. He showed an absolute disregard of danger and set a splendid example in attending to the wounded. Under heavy enemy artillery barrage and Machine Gun fire , he went back to Battalion Headquarters to obtain stretchers for the wounded , and in company with Gunner WILTSHIRE, personally carried them to a place of safety “.

On 2 June, 1917, Sgt. FORREST was seriously wounded in action in the field in France, when he was struck in the mouth by shrapnel. He was immediately evacuated to the 2nd Australian General Hospital at Wimereux, France. He was treated for loss of seven teeth, his tongue was pierced and he had his carotid artery damaged by the shrapnel, which had lodged in his neck, below the jaw-line.  Sgt. FORREST was promptly evacuated to the Fort Pitt Central Military Hospital at Chatham, England for corrective surgery. Following surgery, he spent eleven weeks in recovery and convalescence in England, before being declared fit for further active service.

On 21 August, 1917, Sgt. FORREST was admitted to the Australian General Base Depot at Rouelles, France, following a voyage from Southampton and prior training at the Perham Downs Depot in England. In mid September, 1917, he re-joined the 4th Heavy & Medium Trench Mortar Battery shortly before their deployment to Belgium.

On 31 October, 1917, Sgt. FORREST was recommended for award of a Bar to his Military Medal. The citation reads as follows:- “ For conspicuous gallantry and devotion to duty. On October 21st, 1917, at Bellewarde Ridge ( East of Ypres ) this NCO was in command of a column of pack transport animals taking up ammunition. His column was heavily shelled and many animals became bogged. His promptness of action and coolness saved losses to personnel and in ammunition. He delivered his ammunition “.  Shortly after this action, he was detached to attend an Artillery Cadet Course at St. John’s Wood in England. On 26 June, 1918, he was promoted to the rank of Second Lieutenant and posted to the Field Artillery Reinforcements.

Second Lieut. FORREST embarked from Southampton on 17 July, 1918, bound for the Australian General Base Depot at Havre, France. He was subsequently transferred to the 7th/8th Medium Trench Mortar Battery in the field where he was promoted to the rank of Lieutenant on 26 September, 1918. He was quickly detached to the 10th Field Artillery Battery, unfortunately suffering a gunshot wound to the clavicle, only two days later. He was transferred by the 11th Australian Field Ambulance to the Casualty Clearing Station for treatment, before quickly returning to action.

Only seventeen days had passed until 16 October, 1918, when Lieut. FORREST was again wounded in action. He was severely impacted by enemy gas deployment, which caused temporary blindness and effectively ended his active service at the front. He was swiftly evacuated for treatment at the 10th General Hospital at Rouen, France. A further transfer was required to the 3rd London General Hospital at Wandsworth, England in an effort to aid his suitable recovery.

Lieut. FORREST endured a three month period of treatment and convalescence until 25 January, 1918, when he embarked England aboard the “ Ceramic “, bound for Australia. Seven days into the voyage , he was admitted to the ship’s hospital, suffering from Influenza. On 3 March, 1919, he safely disembarked on home soil at Fremantle, WA. He was discharged from Military Service on 30 April, 1919, being the Termination of his Period of Enlistment.

Bar to the Military Medal

Jim FORREST married Margaret WALPOLE ( known as Madge ) at Busselton, WA on 10 December, 1919. They had become engaged shortly before Jim’s enlistment for War Service.  the couple took over a 400 acre property in Lowden,WA, known as “ Pinchers Brook “.  Much of the property was virgin bush, and after many years of hard physical toil, Jim and Madge transformed the location into a showpiece.

The FORREST family believe that Jim’s strength and dogged determination to overcome adversity, married with his powerful will to survive, has been instilled in subsequent generations of the family. He was very proud to be an Australian and rightfully deserves to be acclaimed as an Anzac Hero.
Madge died on 24 June, 1976, whist Jim survived until 7 August, 1982 ( aged 87 years ). They were interred in graves at the Lowden Cemetery, WA.

Footnote:-  Jim and Madge’s youngest daughter, Vivienne, was named after the Nurse in France, who removed the bandages from his eyes , after he suffered from temporary blindness.

Acknowledgement:- Sincere thanks to SUSAN ( Grand Daughter ) for her research and writing included in the above dedication to her Grandfather – James Ramsay FORREST, MM + BAR.