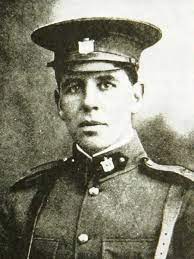 Dynamic leader, very brave soldier, leading Brewer, Champion Rower & Coach, the Australian Officer who advanced further than any other in the objective to capture the third ridge at Gallipoli on 25 April 1915, took aim at Ataturk from Battleship Hill on 25 April 1915, but missed his target.

Eric William TULLOCH was born in Ballarat, Victoria, on 16 April, 1883 to father William George TULLOCH ( one of 14 children ) and mother Agnes Ann ( nee WHEELDON ). Eric’s grandfather and father were leading Brewers in Ballarat, eventually operating the Ballarat Brewing Company Limited.
Eric was a student at Ballarat College, before attending Melbourne Church of England Grammar School in the late 1890’s. He represented Melbourne Grammar in the Australian Rules Football Team and became a very keen Rower.

During this time, he became  part of National History, when his school team defeated Geelong Grammar in the first ever eight-oared boat race rowed between schools in Australia. One of his team-mates was the future Prime Minister of Australia, Stanley BRUCE. Eric joined the Albert Park Rowing Club, competing in the eights and fours.  He was a member of the eights which won Victorian State Championships in 1901-1902. During the 1902-1904 seasons, Eric was a member of the Victorian State eight-oared Teams that became National Champions.

From 1900, Eric TULLOCH began a 4 year apprenticeship studying brewing at the Foster Brewery in Melbourne.  At the completion of his apprenticeship, he accepted the position as brewer at R. MARKS & CO. at Maldon, near Castlemaine, in Victoria, where he remained for two years until 1906.  Eric was then offered the opportunity to become head brewer at the  Swallow Brewery in East Perth Western Australia where he remained for less than two years.

Eric TULLOCH was sought out by German-Australian Brewer, Harry BEIGEL, who was the Principal of Beigel’s Brewery, operating in Bunbury, Western Australia, since 1902.  This Regional Brewery had won a National Award for the quality of its beer in 1905 and Mr. BEIGEL wished to employ the man he thought was the best brewer in the Nation. Eric TULLOCH worked tirelessly in support of BEIGEL to develop some of the most sought after beers in the land and remained in Bunbury until late in 1913. Whilst living and working in Bunbury for six years, Eric became increasingly involved with the Citizen Military Force, where he was promoted swiftly  to the rank of Lieutenant. By 1913 he had been appointed Captain in the 86th Infantry ( West Australian Rifles ).

Early in 1914, Eric TULLOCH departed Bunbury to take up a prestigious position as brewer to J. BOAG & Son of the Esk Brewery in Launceston, Tasmania.  Whilst working in Launceston, he was very active training, preparing a potential fighting force to serve the Nation , should we be called to War.

Shortly after the Declaration of War in 1914, Eric TULLOCH relinquished his exclusive brewer’s role at Boag’s Brewery in Tasmania, returning to Western Australia.  He subsequently enlisted for War Service on 23 January, 1915, being appointed to the rank of Captain with the 11th Battalion, 3rd Infantry Brigade. Captain Eric TULLOCH embarked from Fremantle, WA on 22 February, 1915, aboard the transport ship “ Itonus “, bound for Alexandria, Egypt.  He and his men disembarked in Egypt on 17 March, 1915, promptly transferring to the Overseas Training  Base, nearby.

Captain Eric TULLOCH  was held in very high regard by the heads of the Australian Infantry Forces, being selected to command “ B “ Company during the fateful Dawn Landing at Gallipoli on 25 April, 1915.  TULLOCH and his men were one of only two Groups at Gallipoli, to have successfully met the objectives of the official orders, to be followed after the landing.  Captain TULLOCH and sixty of his men had traversed over the Sphinx and past the Nek, before pressing on over Baby 700, towards the third ridge. During mid- morning, TULLOCH reached the South East shoulder of Battleship Hill, from where they sighted the Narrows.

Captain Eric TULLOCH etched his name in Australian Military History by being the closest Australian Military Officer to enemy lines, and as far towards the height of Chunuk Bair, as any Anzac came  on 25 April, 1915, until being repelled. ( Refer Charles BEAN, official history of the First World War ).  TULLOCH and his Company held the Battleship Hill position for approximately half an hour , until Turkish reinforcements arrived, led by ATATURK.  Whilst  ATATURK was exposed directing his men, TULLOCH fired a shot at the future Father of Modern Turkey, however he missed his target. ( Refer Book – “ Pilgrimage to Crete “ by W.E. WELBOURNE ).  Shortly after firing this shot, Captain TULLOCH realized their situation had become hopeless, ordering his men to retire some five hundred yards.

When retiring and taking shelter near the edge of Malone’s Gully, Captain TULLOCH was severely wounded by a gunshot to his left thigh.  On 29 April, 1915 he was evacuated by Hospital ship and admitted for treatment at the 15th General Hospital at Alexandria, Egypt.  The injury was not responding very well, so, on 26 July, 1915, he was shipped for admittance to the 3rd London General Hospital at Wandsworth, England. Further complications in recovery, deemed it necessary for Captain TULLOCH to be returned to Australia, in an attempt to allow a complete recuperation.   He disembarked at Fremantle, WA on 29 January, 1916. It was suspected that Captain ERIC TULLOCH had seen the last of any direct fighting action in the First World War. He had endured fourteen months in Hospital under surgical and medical treatment since his wounding at Gallipoli.

TULLOCH defied Medical opinion and Army reckoning, to be again declared fit for active service in June, 1916. He embarked from Fremantle, WA on 9 November, 1916, aboard the transport ship “ Argyllshire “, bound for Devonport, England.  On 18 February, 1917, he attended a Course of Instruction at the Southern Command Bombing School at Lyndhurst, England where he qualified as an instructor.

On 23 August, 1918, near Chuignolles, France, Captain TULLOCH commanded two ( 2 ) Companies to capture Froissy Wood. Throughout this operation TULLOCH showed great gallantry, coolness and tenacity, inspiring all those men around him. He was subsequently awarded the Military Cross for his actions.

Another four weeks passed at the front, until, on 18 September, 1918, accompanied by two of his men, Captain TULLOCH rushed a German trench at Hargicourt, near Villeret, armed only with a revolver, overpowering and capturing the crews of two enemy machine guns and taking six prisoners.  He was awarded a Bar to the Military Cross for his actions, given command of the 12th Battalion and promoted to the rank of Major.

Major Eric TULLOCH saw out the balance of the War in France, before being seconded to England, to work for the Sports Central Board in London. In February, 1919, he was appointed Officer-In-Charge of the Rowing Section. He coached the A.I.F Team to win the King’s Cup at the Royal Henley Regatta.
On 15 May, 1919, Major TULLOCH embarked from England aboard the “ Orontes “, bound for Melbourne, Victoria, where he disembarked on 26 June, 1919.  He was subsequently discharged from active service on 29 August, 1919.

Shortly after returning to Australia, Eric TULLOCH took up a senior position with the Victoria Brewery ( part of Carlton and United Breweries Pty Ltd ) in East Melbourne. He was an original meber of Legacy and continued his involvement in Military activities being promoted to the rank of Lieutenant-Colonel, in command of the 22nd Battalion Commonwealth Military Forces, in 1921.

Eric TULLOCH also resumed involvement in his passion for Rowing, with appointment as Coach of the Melbourne Grammar School first eight from 1921-1926. His team won the Head of the River in 1923 and were runners-up in 1924.

Eric’s wife, Lilian, was receiving treatment in Sydney for seriously ill health, while he continued to work in Melbourne. He was temporarily living at the Lauriston Hall Guest House in Wellington Parade, East Melbourne.  Early on the morning of Saturday 8 May, 1926, guests were awoken by the commotion of a struggle, when TULLOCH had intercepted an intruder in the building. Tragically, the armed intruder shot TULLOCH twice, once through the heart and again in the lower abdomen. A local Doctor was called, with TULLOCH being pronounced dead at the scene. He was only 43 years of age. The identity of the murderer has never been established.

Eric TULLOCH was afforded a large Funeral, with full Military Honours. During the service conducted in the Melbourne Church of England Grammar School Chapel, Prime Minister Stanley BRUCE recited a passage from the Bible and a further tribute was presented by Sir Arthur ROBINSON ( Old Scotch Collegians ). The funeral procession travelled along St Kilda Road to the Brighton Cemetery attracted thousands of mourners along the complete one mile journey.