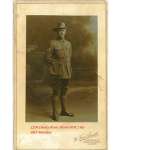 ” For Gallantry and Devotion to Duty.  At ALBERT on 5th April while acting as Company Sergeant Major he rendered excellent service during the heavy bombardment that preceded the attack by moving up and down the line encouraging his men.  When a withdrawal was ordered later , he showed exemplary coolness and gallantry in controlling the movements of his sections and effecting an orderly withdrawal “.

SECOND  BAR  TO  MILTARY  MEDAL ( The Second Bar was recommended, however it appears was never approved )

” For conspicuous Gallantry and Devotion to Duty during the advance near LE VERCUIER on 18th September 1918.  Sgt. ALCORN moved amongst his platoon assisting to overcome opposition as it mgs met.  His coolness and daring greatly inspired his platoon.  He led two Bombing parties during the operations, in each case successfully overcoming the enemy opposition.  His work throughout was of the greatest assistance to his Company Commander , and his energetic conduct was the means of assisting to break down the enemy’s resistance.  His courage and daring created  a marked confidence in his men and his initiative was the means of preventing a number of casualties “.

Information from Barry WHEALS, Bunbury WA-Extracts from Copy of letter written by Pte. ALCORN from Egypt on 21st November 1915 to his sister Sarah:-
” Just a few lines to let you know I am still in the land of the living and am in good health.  We haven’t been told when we are going to the trenches but expect to go any day. Our Officer told us to keep our Rifles in good order as we might want to use them any time , so that seems like business, don’t it.  I had arranged with the rest of the Collie Boys to go and have a look at the Citadel this afternoon , but I was unlucky enough to be picked for guard this morning so had to stop in Camp, so I will be lucky if I see it now.  I was talking to Frank HALL, Jack TREWELLA, and George GAMBLE today and they all look real well.  Sam GAMBLE is in the Luna Park Hospital with Rheumatics  but I hear he is getting alright- wants to go back to the trenches.  Alex McCAUGHAN is in the same Hospital with Dysentry , he was in the trenches for 28 weeks and never got a scratch, he is a Collie Boy.  I have sent a good few views of Cairo home, so if you go up at Xmas you will be able to have a good look at them.  I have been broke since I arrived but we are getting paid again this week, so I will be on velvet again.  This morning, Sunday, the bugle sounded get out of bed at half past five and have breakfast at six.  It would be nice to be at home so I could have a sleep in, we have to get up at five thirty every morning.  We expect to see  Joe ANNESLEY and Charlie HUTTON here anytime this week.  They are expected to land at Suez tomorrow. I hope they have got some news of some sort as we haven’t heard from Australia since we left Fremantle six and a half weeks ago “.