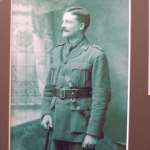 Next of Kin: Father- Henry Stanley Bleechmore
Next of Kin Address: The ' Pines " Plympton SA
Religion:

” For bold decisive action near DUMAR on 30th September  whilst in charge of the vanguard.  Having located a large column  of enemy with transport moving N. W. alomg the BEIRUT Road & notwithstanding heavy enemy Machine Gun fire , he disposed his Squadron so as to bring fire to bear as effectively that the the road was soon blocked  with dead & transport, thus ensuring the complete surrender  of the column which ultimately took place.  Again on 2nd October 1918 by bold leading, after being ordered to seize KHAN AYASH  he proceeded in heading off the enemy just as they were mounting a Machine Gun in the KHAN “.